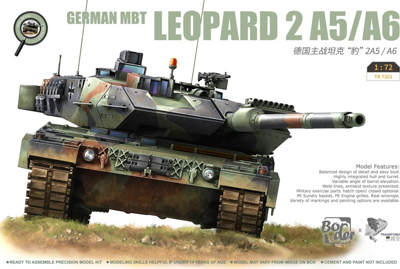 It's a rather slow and unassuming week for news in the model world so only a few novelties in our offer. From Border Model came a new incarnation of Leopard 2 A5/A6 in 1/72 scale. It's a beautifully detailed and cast model kit which can be a pleasure to build albeit - quite small for some. There has also been a restock of some Border tools along with new ones like e.g. very handy and good looking modelling clamp/holder in 3 colour variations. Master Box on the other hand continues their S-F themed figure series in 1/24 scale. Two new figures are available one of which is quite scantily clad Ms mechanic/engineer. Jumping back to 1/72 scale - Hobby 2000 released another A4 Skyhawk - this time its E variant. Also in this scale there are two new F-14 model kits from Great Wall Hobby. There also has been some movement in 1/35 scale with LARC amphibious vehicle, another variant of British ATMP and a nicely moulded a whole pile of US jerry cans - perfect set for a diorama! 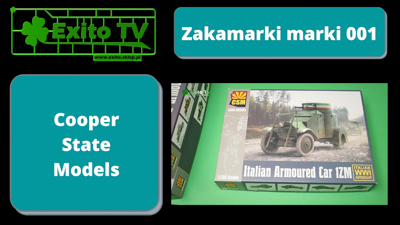 We've launched new film series on our Youtube channel! "Brand New(s)" are films focused on single model brand, which gives a condensed info about them. Quick look at the box's contents and their key features.Quick look at their products and their key features. Great opportunity to familiarize yourself with products of a given brand that might be less popular and less featured over the Internet. As always - we've included English subtitles. Don't forget to write in the comments what you think about our new series!

Current week gives a great opportunity to stock up on the highest quality Japanese model kits, tools and other modelling consumables from Tamiya - at a very good prices! We also have a nice discount on the industry's best 1/700 scale warhips from Flyhawk for all miniature shipwrights! Also for the fans of modern jets in 1/48 scale we have a -12% on the Kinetic models! This promotion lasts from 19th to 25th June!