Exito is proud to announce the launch of a new high quality decal range, which is available for sale since the beginning of this month. Please read our introduction and full announcement below.

Exito was founded in 2008 as an internet hobby shop. In 2010, we expanded by launching a brick and mortar store in Cracow, Poland, and soon achieved a strong position within the modelling market in our country. We’ve also gained many happy customers abroad.

However, from the very beginning we had more goals than only reselling the products of other various manufacturers. We worked hard to build a community around our brick and mortar shop, and eventually a modelling club called “Grupa B” was established, whose members meet in a specially prepared room where they can build models, exchange experiences, or just chat and have fun. The members of “Grupa B” often attend modelling shows and present their works together on club tables. This year, for the very first time the club organized a modelling show of their own.

Another goal of Exito was to launch a range of quality products under our own brand. For this purpose, we’ve teamed up with renowned aviation illustrator, Mr. Janusz Swiatlon, who previously worked for such publishers as Classic/Chevron, Osprey, Kagero, Stratus/MMP and AK-Interactive, and now will draw profiles under the direction of an experienced decal researcher and book author, whose participation will allow us to offer you accurate decals and include original photos of the covered subjects, wherever possible.

Exito Decals enters the market with two sets available both in 1/48 and 1/72 scale. The decal sheets are printed by industry leader, Cartograf of Italy, which ensures top printing quality and ease of application. These are complemented by instructions that differ from the plain market standard. What you get are essentially high quality posters with accurate and inspiring illustrations created by Janusz Swiatlon. Each subject is presented on an A4-sized sheet, with large side aircraft profiles printed on the front, and the remaining artwork, photos and all necessary information laid out on the rear side. This way you not only get some cool decals for your model kit, but also attractive posters to adorn your man cave, at the same time! 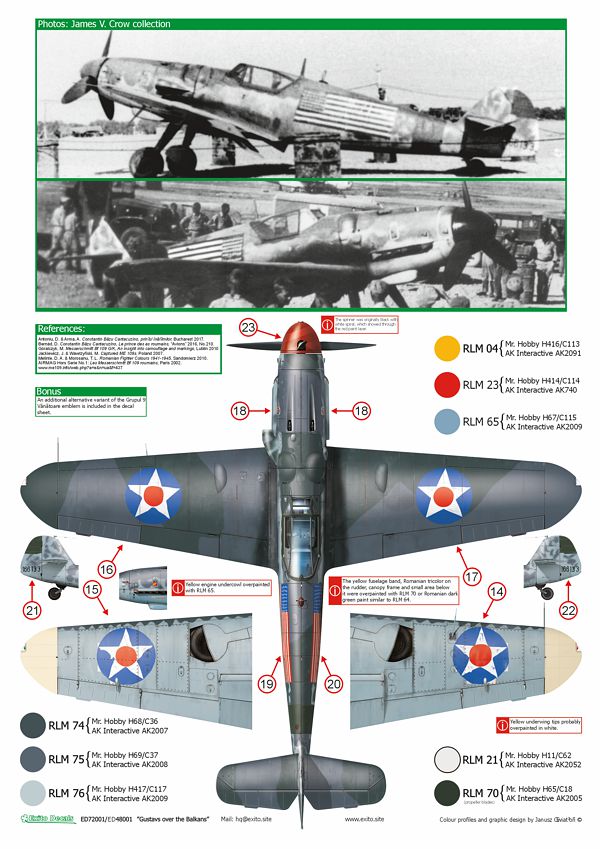 Our first decal set is called “Messerschmitt Bf 109 G-6, Gustavs over the Balkans” and covers three quite unusual machines:

The first two options have never been reproduced in decal form before, whilst the last one did not receive enough attention from other manufacturers. Decals include bonus emblems of the Romanian Grupul 9 Vânătoare. This set is available directly from us:

- Fw 190 A-5, ‘Yellow 5’, flown by Fw. Karl ‘Charly’ Willius of 3./JG 26, Dno, Soviet Union, early April 1943.
None of these aircraft have been available in decal form before. ‘Yellow 5’ is the only documented Fw 190 with victory markings that served on the Eastern Front. Decals include bonus ‘Andrehkurbel’ stencils, which are missing from the majority of kit and aftermarket Fw 190 stencils. This set is available directly from us:

Foreign distributors will be listed soon on our website and FB fan page. Further releases are already in preparation – please follow us on FB not to miss the latest news: https://www.facebook.com/Exito-Decals